Doble Deluxe. Our Princess Walada room takes its name from the Andalusian poet, daughter of the short-lived caliph Muhammad al Mustakfi (Córdoba, 994-1091). Its location coincides with the old noble area of the house, hence its frescoes, moldings and hydraulics, all recovered and original from the 19th century. With a balcony in each of its rooms, divided by arcades, in one there is a 2x2 King Size bed and in another a spectacular bathtub with views of the Calleja de los Arquillos, where an episode of the Cantar de Gesta de the Infants of Lara.

Doble Deluxe. Our Ibn Zaydun room is a tribute to the great Andalusian poet born in the Umayyad Córdoba of the s. XI. Located in the old noble hall of the building, it has two large balconies facing Calle Cabezas. In it, the frescoes on the walls, the moldings and the outstanding rose window have been restored, as well as the magnificent hydraulic floor, all original from the 19th century. A large bathtub built into the bedroom becomes the protagonist of the space.

from€129
Book now
See all offers 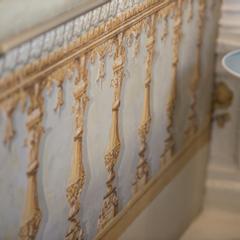 Hamman for exclusive use Personalized treatment for our clients